I checked my emails this morning to find the much awaited Most Contagious 2009 report in my inbox. It was a nice surprise and definitely something you should read to remind yourselves what a fantastic year 2009 has been. You can download the 45-pages PDF here or you can read the slideshare document clicking the image-header above.

I’m taking the opportunity to put down some of the best highlights from the REPORT together with some extra content that have stood out during 2009:

Make sure you read Johnny Makkar’s blog at Attention Digital and take a look at his extensive spreadsheet of branded iPhone apps.

And obviously, probably the most watched video of all time, the JK Wedding Entrance

Yesterday I stumbled across this video which has received nearly 3 million views on YouTube.

It’s been put together by 172 communication students from the University of Quebec in Montreal (UQAM) in around 2/3 hours with no idea they’d receive such international coverage.

What really strikes me is the fact that the majority of people will think that in terms of content, the video is not really a very original idea as it’s been done before many many times (as I did). However, if you carefully think about it, no university has ever done something like this before, as the majority of them usually tend to spend a large amount of cash to reach international students.

Behind this video there is obviously a bunch of ‘Generation Y-ers’ who will have spread the word with all their friends, reaching a huge number of young people.

As a result, I’d bet my loyal dog that a lot of kids would remember this university, not only because it definitely looks like a fun place but the campus looks rather nice too!

What do you think?

Posted by Vincenzo Annunziata on November 25, 2009 in Social Media, Viral

I am absolutely intrigued by this campaign, which i think is genius!

From Monday 17th November, Vodafone is sending this happy chap around few UK-cities with 4 Dell Mini-Notebooks with built-in (vodafone) broadband to give away everyday to four lucky people!
The Live Guy is going to send clues through Social Media platforms like Twitter, Facebook and Picasa on his current locations…

The objective is for people to follow him, guess where he is and go snap a notebook from his bag – simple as that – great PR Story!  He’ll be in London on Friday November 28th, so switch your brain GPS and start following him...

I personally think this is a great offline-online reality-game which is, once again, going to set a benchmark for many brands to try and be more experiential in the marketing space
Real shame I am not going to be in London that day, but will be wondering the streets of 5th Avenue instead eh eh ;o)

I hope you can give it a go, and let me know if any of you lot gets lucky!

Over and Out, Enzo

Posted by Vincenzo Annunziata on November 14, 2008 in Social Media 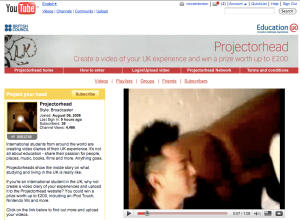 This week, British Council launched a YouTube competition for existing international students to promote and create a positive buzz around “the life as a student in the UK”.

The competition is very simple and evolves around uploading a short video about your own experience as a person living and studying abroad in the UK, for the chance to win cash and/or an iPod Touch

I have to say, at first I was a bit confused as I couldn’t understand why I should think about existing international students in the UK as my first target audience for such campaign, when they are probably the last people i should convince to come and study over here….

After thinking about it for a second, the whole thing became clear… they simply need advocates; and being social media probably the best and first way for these students to be in touch with their friends back home, it becomes both the most relevant and important space for them to share this experience with their peers.

There is a simple strategy here which sits on a loyalty ladder: from non-existing consumers all the way up to advocates… (Thanks Lydia to remind me about this!)

The British Council are not communicating straight to the ones who could potentially become international students in the UK (non-existing audience/prospect) but they are simply creating a two-way-conversation between the brand and their existing ‘consumers’ to facilitate a stronger relationship and turn the latter into loyal advocates.

The moral here is: “To reach your marketing objective, always think very carefully about the ones you want to engage in the conversation. The people you may want to reach in this case are not necessarily the ones to talk to…”

This is definitely something loads of brands tend to forget… what do you think?

Posted by Vincenzo Annunziata on November 5, 2008 in Social Media

To promote the launch of the Andy Warhol season at the Hawyard Gallery in London, the Hawyard community has developed a website for users to gain 15 seconds of fame…  http://www.15secs.tv/

The idea seems pretty old to me, however they have good social media elements in there:

Once you upload your 15 secs video on the YouTube page (http://uk.youtube.com/group/15secondsoffame) you are in for a chance to win Andy Warhol goodies…

After talking at a Sunny Side Up session about the 7th Syndacate Bloggers’ activity for the V&A Cold War expo, I am kinda intrigued by how galleries are using more and more social media techniques to create buzz around their exhibitions – good on them …

Posted by Vincenzo Annunziata on October 30, 2008 in Social Media