2008 has definitely been a very busy year for Burger King.

From the great PR stunt of a premium £85 burger and the controversial Whopper Virgins to the new BK Meat Fragrance launched last week, conversations around the brand have been hitting the roof.

The idea is pretty interesting and it shows how much the brand is more and more willing to experiment new things. As we’ve seen with NikeID Italia, the Ford Fiesta campaign ‘This is Now’, and Profero’s WU Mobo Awards Contest, connecting to a young audience, new talents and the online community seems to be a big trend these days and for Burger King this appears to be only the beginning…

On the website you will notice there have been already three events in partnership with new creative talents and more are planned to be happening in the next few months at the now busy BK studio in Chicago.

The first event attracted 600 people, all rushing to get hold of the limited edition t-shirts from the artists involved in the project – all silk-screened at the venue on the night – pretty impressive!

The surprise is right here – A week after the event, the Studio launched an online platform where users could create their one-of-a-kind t-shirt using each single creative asset developed by the artists. You can start getting creative right here and receive your unique t-shirt for $28 without getting into any trouble with silk-screening it yourself (Unfortunately at the moment they only ship in the US)

Posted by Vincenzo Annunziata on December 18, 2008 in Branded Experience, Creativity

The new controversial campaign by Burger King ‘Whopper Virgins’ is probably joining, together with the Motrin Case, the ‘most talked about campaigns in the blogosphere’ category

Because it’s generating so much buzz and I’ve been reading so many mixed reactions – as you usually do – I wanted to give my opinion on this; although i have to say i still have mixed feelings myself…

From a moral point of view, it feels totally outrageous to invade under-developed countries with drastically different cultures and try to change their eating habits. I find it kinda crazy to be spreading this ‘burger love’ in these remote lost areas, especially when nowadays burgers are the reason why so many people are so obese and unhealthy in this world

On the other side, i do like the experiment itself – the concept has something appealing about it but it’s the whole tone of voice and the way it’s been produced that just doesn’t work for me

To get people from different cultures to try for the first time a burger is definitely a courious experiment, however why invading an entire country, trying to create this horrendous cultural backlash – when they could have simply flown over to America ten different citizens selected from these remote areas and do such experiment – it would have probably received a better PR for giving these people a chance to travel the world  – no?

I am not sure they chose the right path, however lookin at this graph below it kinda shows how people are reacting to this campaign in a totally different way, and positive feedback is actually on the increase…

Overall, I am not sure how Burger King is actually behaving towards these conversations online – I haven’t seen yet any response directly from the brand but – be this negative or positive – they are definitely receiving an enormous level of attention.

To prove this I did a Search Trend for ‘Whopper’ and look at the graph below – the slope is getting higher day by day after a very consistently flat period – not surprising eh? 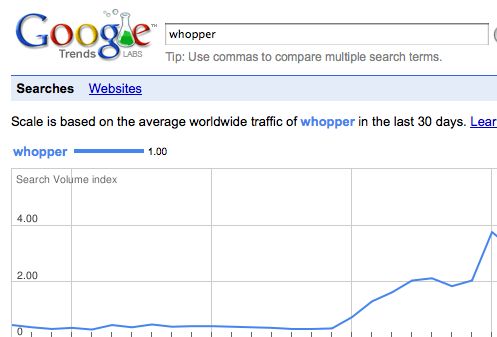 Posted by Vincenzo Annunziata on December 12, 2008 in advertising, Creativity