See on Scoop.it – Rumour Has It : The Awesomeness Aggregator 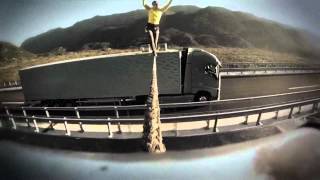 World record-holding highliner Faith Dickey battles in the wind to cross the line between two speeding trucks. Will she make it before the trucks reach the tunnel that lies behind the next bend?

The stunt was set up to show the precise handling of the new Volvo FH. Filmed on an unopened highway in Croatia in cooperation with Hollywood stunt director Peter Pedrero (James Bond, Harry Potter, Pirates of the Caribbean.) Directed by Academy Award nominee Henry Alex Rubin.

Posted by Vincenzo Annunziata on August 20, 2012 in Social Media